Losing a Loved one to Suicide – Struggle with the Aftermath

Losing a Loved one to Suicide – Struggle with the Aftermath

Most of us have been touched by suicide. There are roughly 42,000 suicides every year in the U.S. Some have lost a young child, some lost a parent, a brother, a sister, a colleague, a friend or a classmate. In a recent survey conducted by SAMHIN, 30 percent of individuals who took the survey knew someone who had died by suicide. Each suicide leaves behind at least six individuals grieving and feeling devastated – four family members and at least two friends. In most cases the number is likely much higher.

Suicide is a tragic outcome of complex reasons and circumstances which often include untreated mental illness. Often, those left behind try to solve the puzzle without the missing pieces, of the reasons behind the suicide. The clues were lost in the remains of the deceased. This only adds to the agony and suffering of those left behind.

Any loss results in sadness and grief. But, often, there is a short or long period before the death, that the individual is allowed to prepare oneself for such loss. After the death there are rituals and services that provide opportunity to heal and grieve. All this allows a way to put a closure on the inevitable end of life.

When someone dies of suicide, families are deprived of such “preparation” and there is no closure. They are left with countless questions and no answers. Again, this adds to the emotional suffering of those left behind. They feel devastated. They are their own harshest critics. They unfairly blame themselves for the suicide. They constantly search in vain what they could have done to prevent the tragedy.

Normally, one eases one’s suffering by sharing with others the pain of such difficult experiences. Unfortunately, after a suicide, the families struggle with guilt. The shame and stigma attached to suicide keeps these grieving and hurting families from sharing their pain with anyone. They fear of what samāj (our society) will say. They dread being judged. They choose the silence.

The suicide loss survivors, (those who have lost a loved one to suicide), suffer in silence for a long time – often for years. They have been denied the normal opportunities and mechanisms for healing after the loss.

Now, these families have an opportunity for healing. Recently, SAMHIN launched a free Suicide Loss Support group, Janani, in Central New Jersey, for those who have lost a loved one to suicide. The weekly support group provides the much-needed hope and healing to the grieving families. It provides a place where they can speak safely without being judged. These meetings are confidential. Whatever is discussed in the meeting stays within the meeting. They meet other individuals who have also lost loved ones to suicide. Trained facilitators help facilitate the meetings.

It is time to begin the healing and end the suffering. When the veil of secrecy lifts, the healing begins. You can get your life back.‬ ‬‬‬ 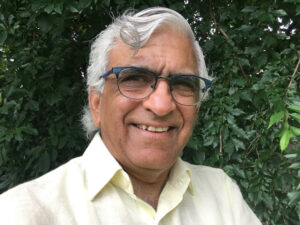